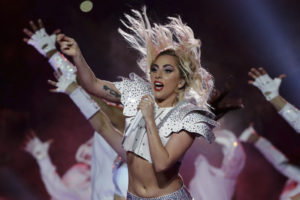 Lady Gaga didn’t get paid for her Super Bowl LI halftime show, but its boost to her career was far greater than the $5 million price of a Super Bowl commercial.

“Million Reasons” was the most purchased song of those she performed during her 13-minute set, with 47,523 downloads on game day.

To establish its base, BuzzAngle Music used average daily sales for the four days leading up to the Feb. 5 event.

The performance even had a halo effect, as Gaga’s daily song streams jumped from an average of 2.3 million to 5.4 million on game day — then up to 7.5 million on Monday.

The artist further delighted her fans — just hours after jumping into Houston’s NRG Stadium — by announcing she’ll launch into her first tour since 2014 on Aug. 1.