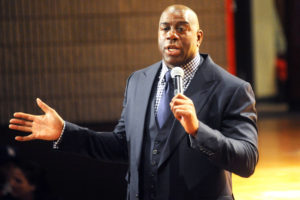 Los Angeles Lakers legend and successful entrepreneur Ervin “Magic” Johnson has made his intentions clear as he begins his stint as an advisor to the Lakers.

Johnson spoke with USA Today and made it very clear what he’d like to see happen in the near future.

“Working to call the shots, because it only works that way … Right now, I’m advising. I get that,” Johnson said. “But at the end of the day, then we all got to come together and somebody’s got to say, ‘I’m making the final call,’ all right? And who’s that going to be? So, we’ll see what happens.’’

Lakers legend Magic Johnson has returned to the franchise as an adviser to owner Jeanie Buss. Rumors went crazy about Johnson making the move to one day run the franchise.

The Lakers are once again underperforming, and with Laker President Jim Buss promising that after 3 year, if the Lakers weren’t restored back to being a contender, he would step down. Jeanie Buss made her move, and Magic has made his intentions clear. 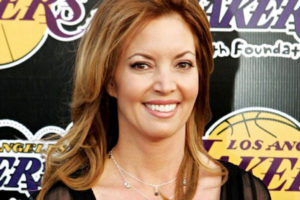 Jeanie is expected to take a bigger role in running the franchise now that Jim is taking a step back. She and Johnson have had a close relationship through the years.

“Look, Jim knows where we are, Jeanie knows where we are, as a franchise, and so some decisions have to be made…,” Johnson said. “I may only be in this role for a short term, I may be here for a long time. We’ll just have to wait and see what happens. I can’t tell you that right now.’’

Johnson was a minority owner of the Lakers in the 2000s, but this is his first step into a personnel role. He is using his time as an “adviser” to brush up on the intricacies of the NBA. The Lakers have a wealth of young talent — starting with D’Angelo Russell, Julius Randle and Brandon Ingram — thanks to years of recent struggles.

“The main part for me is really learning the other part that I didn’t know, and that is to understand the CBA, the salary cap, where we are in terms of the salary cap and who’s a free-agent-to-be,” said Johnson, who expressed his faith in Lakers coach Luke Walton during ESPN’s UCLA-Oregon broadcast Thursday night.