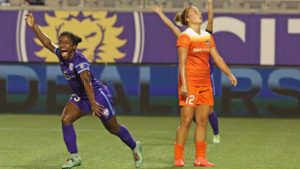 “We’re delighted to bring back this group of players that made up a strong portion of our inaugural roster,” Pride Head Coach Tom Sermanni said. “With the re-signing of these players, paired with the acquisitions we’ve made during the offseason, I’m confident in the talent and competitiveness we’ve compiled for the upcoming NWSL season.”

Spencer, 26, returns to the Pride after spending the offseason in Australia with W-League side Canberra United, where she led the club to the regular-season title. In her first season in Orlando, Spencer appeared in all 20 matches and scored four goals, including the June 23 game-winner against the Houston Dash – a strike that earned her Goal of the Week honors.

Evans, 25, returns to the midfield following a stint with Brisbane Roar, also in the W-League. After being selected in the 2015 NWSL Expansion Draft, Evans started 16 matches in 2016 for Orlando and added an assist when she set up Alex Morgan on Sept. 7 against Sky Blue FC.

A former Florida State Seminole, Pressley made 14 appearances for her home state club. A native of Melbourne, Fla., the 26-year-old defender started 11 matches, totaling 1,027 minutes on the backline.

Bledsoe, 25, re-signs with the Pride after a 2016 season that was cut short due to injury. After earning her first career start on May 28, the goalkeeper suffered a broken leg during training and was ruled out for the remainder of the campaign. Bledsoe made two saves in her 90-minute appearance.

Season tickets for the 2017 Orlando Pride season are currently on sale and can be purchased at orlando-pride.com/tickets or by calling (855) ORL-CITY. Fans can secure a seat to the Club’s first match in its new stadium by purchasing a 2-for-1 ticket pack, which includes a ticket to the opener as well as a future match.