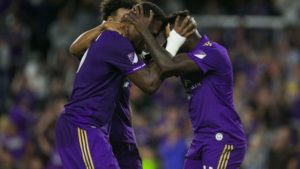 Orlando City fought a fierce battle on the pitch to defeat the Philadelphia Union 2-1 in their second match in the brand new Orlando City Stadium. Over 25,000 fans (a second sellout in the new stadium) cheered on passionately as the Orlando City Soccer club worked the field with a strengthened defensive effort and made it a rough night for Philly.

The combination of Cyle Larin and Carlos Rivas once again gave their opponent fits as their combined speed gave them many chances in the Philly box. Larin, who scored both goals in tonights effort, managed to be in the right place at the right time as the Lions found themselves in the area of the Philly box many times. Mario Perez Garcia also lended a big hand in giving Larin opportunities to score.

In the 76th minute, Garcia passed to Rivas who crossed to Larin, giving him a one on one chance against Philadelphia goalie Andre Blake but shot it just over the crossbar.

The match was contentious and physical. Larin at one point was tackled in the Philly box but got no call. This frustrated Garcia who argued with the referee with other Orlando players. Garcia did initiate some pushing and shoving with Philadelphia players and would up getting a yellow card. The match actually had a total of 5 yellow cards, two called on Philadelphia.

Carlos Rivas was a fixture in the Philly goal area. Setting up several Orlando players and winding up with his own yellow for interfering with a free kick. Rivas, who was nursing a hamstring injury from earlier this week, finally succumbed to leg cramps in the 86th minute and called for a substitution.

Philadelphia put on a furious fight in stoppage time, repeatedly attacking the Orlando goal only to be fought off by the Orlando defense. Orlando did get a little lucky as the union’s Isinho, a new fixture for the club from Sao Paolo Brazil,took a shot that hit the inside of the left post of Orlando’s gaol, but bounced straight back out of the goal. This was a clean shot that Orlando is lucky to get past.

Lions coach Jason Kreis’ focus on defense paid off tonight as the Orlando back line of Jose Aja, Will Johnson, Danny Toa, and Jonathan Spector as well as the entire squad put on a stellar effort on defense.

Orlando’s next match is on April 1st at the Columbus Crew.