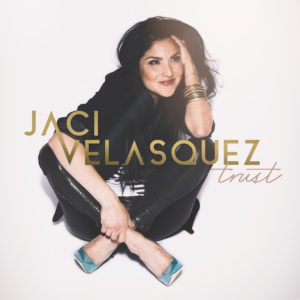 Bilingual, multi-Platinum selling recording artist and actress Jaci Velasquez releases her first, full-length studio album in over five years today from Integrity Music. The highly-anticipated, critically acclaimed recording, both the English-language version, Trust, and Spanish-language Confio, is now available globally in over 160 nations. A Billboard Latin Music Award winner with five Spanish albums to her credit, this marks the first time for Velasquez to simultaneously release an album in both languages.

Produced by David Leonard (All Sons & Daughters) and Chris Bevins (Salvador, Phillips Craig & Dean), Trust (Confío) is also the first worship album from Velasquez and features new songs penned by her and her husband, Nic Gonzalez, along with songs by Martin Smith (Delirious?), Michael Farren, Dustin Smith and more. Notable tracks include the first English-language single going to radio April 28, “God Who Moves The Mountains,” “Praise The King” and the Spanish-language version of this song that is at radio today throughout Latin America, “Gloria Al Rey,” “Lay It At The Cross,” which is being featured as LifeWay Christian Stores’ April “song of the month,” “Grande Eres Dios” (“Great Are You Lord”) and “Trust You,” a song that sparked the project’s title and captures the core message of this new album.

“Trust is an underlying theme for me as a wife and a mom,” says Velasquez. “You can’t have a relationship without trust. Like my husband and I, there are no secrets and we trust each other no matter what. The same is true with my relationship with Jesus.”

Music fans will have the opportunity to see Velasquez sing her new songs, as well as her mega-hits like “On My Knees” and other fan favorites spanning 17 albums and 16 No. 1 radio singles, on her first major tour in over seven years. Her 20-city, album-launch “Trust Tour” featuring a full band and Nic Gonzales (lead singer of Salvador) has already been received by enthusiastic crowds in Miami, West Palm Beach, San Antonio, Dallas and more, and is in Midland, TX tonight before traveling to these Texas cities in the coming days: El Paso (4/1), Lubbock (4/2), Webster (4/7), Fort Worth (4/8) and Garland (4/9).

Sponsored by One Child Matters, a child sponsorship organization helping to meet the physical and spiritual needs of children in poverty-stricken areas of the world, and booked by Charles Dorris & Associates, LLC the tour is expected to continue in major markets throughout the US and Latin America. Watch Velasquez’s Facebook page for all the latest concert updates.

In addition to the album and tour, Velasquez is currently working on a book, a clothing line that raises support for Autism related causes, and she will be featured in two Christian films releasing in 2017. For all the latest Jaci Velasquez news, go to www.jacivelasquez.com, Facebook, Twitter and Instagram.