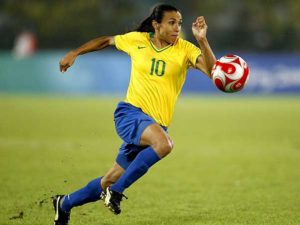 ORLANDO, Fla. (April 7, 2017) – Orlando Pride has acquired five-time FIFA Women’s World Player of the Year Marta Vieira da Silva, adding one of the world’s best goal scorers to compete for the 2017 National Women’s Soccer League (NWSL) championship with the team. Da Silva, commonly known as Marta, will join the Pride on a two-year contract with an option for a third, pending the receipt of her P-1 visa and International Transfer Certificate (ITC). Per team and league policies, additional terms of the contract were not announced.

“We are incredibly proud to bring Marta to Orlando, and I am personally very excited as I have been a fan of her for many years,” Orlando City SC CEO Alex Leitão said. “Our technical team worked hard to add the best, most accomplished women’s soccer player in the world to the roster.

“We started the Pride to win, and bringing Marta to Orlando is a testament to our belief in this team, our supporters and the passion for soccer in Central Florida,” Leitão added. 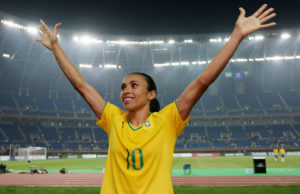 Marta has won league championships at the club level 10 of the last 12 years, most recently leading Swedish side FC Rosengård to the 2014 and 2015 Damallsvenskan title. The forward’s decorated career also includes four Damallsvenskan championships with Umeå IK (2005-2008) and one with Tyresö (2012); Copa Libertadores de Fútbol Femenino and Copa do Brasil de Futebol Feminino titles with Santos (2009); and Women’s Professional Soccer (WPS) championships with FC Gold Pride (2010) and the Western New York Flash (2011).

“Marta’s resume speaks for itself. She is not only the best player in the world, she is a player that fills one of our biggest needs on the field,” Orlando City SC General Manager Niki Budalic said. “Our goal this offseason was to evaluate our first year’s performance and give the Pride the best tools for success in 2017 and forward. With the addition of Marta, as well as fellow veterans Ali Krieger, Ashlyn Harris and Alex Morgan, among others, we are building a strong, exciting lineup for years to come.”

Known for her speed and technical ability, Marta is one of the game’s most revered players both in individual honors and in the record books. The 31-year-old has been named FIFA Women’s World Player of the Year five times over her playing career, winning the globe’s top soccer honor each year from 2006-2010, and was on the final three shortlist every other year from 2004-2014. This year, Marta finished second for the annual award, now dubbed “The Best FIFA Women’s Player”.

Marta made her debut with the Brazil Women’s National Team in 2002 and was named to her first Women’s World Cup squad a year later. Since then, Marta has surpassed the 100 mark in both international goals and appearances, averaging a goal a game. In 2004, Marta led Brazil to a second-place finish in at the Athens Olympic Games and, later, she and Brazil were runners-up at the 2007 FIFA Women’s World Cup. She would go on to win both the Golden Ball and Golden Shoe in the latter tournament.

In 2015, Marta scored her 15th career Women’s World Cup goal, becoming the top goal scorer in the tournament’s history. She is just two goals shy of becoming the World Cup’s all-time leading scorer for both men or women, currently tied with fellow countryman Ronaldo and a goal behind top-ranked Miroslav Klose of Germany.

The upcoming Pride season will be Marta’s first club season in the United States since 2011, when she led the Flash to the WPS league title in their expansion year. In the two seasons prior, Marta was named the league’s Most Valuable Player while a member of California’s Los Angeles Sol and FC Gold Pride.

Marta and the Pride will open the 2017 NWSL season on April 15 at Portland Thorns FC. Home town fans will get their first opportunity to see the star player at Orlando City Stadium on April 22 when the Pride host the Washington Spirit in their home opener.