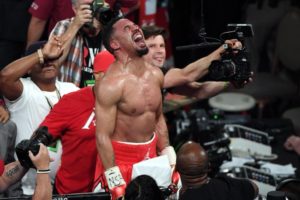 Boxer Andre Ward knocks outs Russian boxer Sergey Kovalev at the Mandalay Bay in Las Vegas, Nevada.  The 33 year old is now the best boxer in the world with 32-0.  “Once I compute a fighter in my brain, I know what to do the next time around,” he told Kellerman.  “a great fighter (referring to Kovalev). Facing a great fighter, you’ve got to raise your game to the next level…Championship fights really start in the second half,” Ward continues. “When I saw him react to shots that were borderline, I knew what I had.”