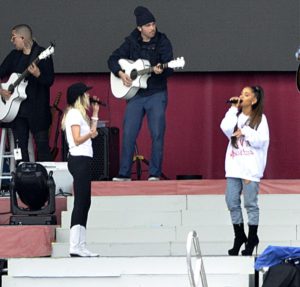 Ariana Grande, shown here rehearsing, has defiantly vowed to carry on with her “One Love Manchester” concert this evening as security is stepped up following the country’s second terrorist attack in two weeks.

‘After the events last night in London, and those in Manchester just two weeks ago, we feel a sense of responsibility to honour those lost, injured, and affected.

‘We plan to honour them with courage, bravery, and defiance in the face of fear. Today’s One Love Manchester benefit concert will not only continue, but will do so with greater purpose.

‘We must not be afraid and in tribute to all those affected here and around the world, we will bring our voices together and sing loudly.

‘I am pleased to say we have the full support of Greater Manchester Police and the Government and are assured the safety of all those attending is the highest priority.’ 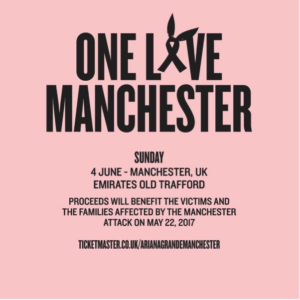 Here is where you can watch tonight’s concert:

Freeform and BBC will also air the show and MTV will stream it live online.

ABC will show a one-hour highlight special after Game 2 of the NBA Finals.

Proceeds from the event go towards the We Love Manchester emergency fund, which is providing financial aid for families affected by the suicide bombing.