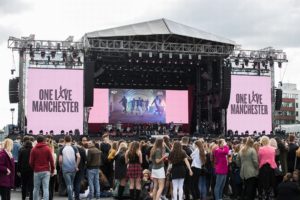 Ariana Grande’s One Love Manchester benefit concert has already raised more than $3.5 million for the families of the victims of the May 22 terrorist attack, and that number is only get bigger as the week drags along.

Stars such as Robbie Williams, Niall Horan, Justin Bieber, Milie Cyrus, Pharrell Williams, Take That and Katy Perry also performed at the concert, infusing messages of strength and positivity throughout the night. Grande performed with various artists, including The Black Eyed Peas and Victoria Monet.

The British Red Cross told HuffPost on Monday that people around the world donated $2.7 million by texting the word “LOVE” to 70507 during the Sunday concert, which triggered a £5 ($6.50) donation.

Additionally, the organization raised $600,000 through other online donations.

All donations go to the We Love Manchester Emergency Fund, which was started by the Manchester City Council and the British Red Cross in the aftermath of the attack.