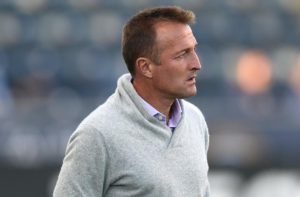 Orlando City head coach Jason Kreis took the usual questions from the press in last night’s post match press conference. After last night’s 3-1 loss to Toronto FC, he decided he could no longer hold his tongue:

“It hasn’t been asked by anybody and I spent the entire season keeping my mouth closed about it but tonight I need to say that it’s beginning to feel like in this stadium, I know this from prior experience, but it’s beginning to feel like in this stadium we have referees that will not make critical calls for us for whatever reason. It appears to me that the referees are bending over backwards to show that they’re not going to show any bias. Perhaps it’s due to us having a raucous crowd or whatever it is but I’m tired of it. I’m absolutely tired of it and I have to say here tonight that I don’t think that we as a Club, as a fan group, as a coaching staff, as anybody else, that we should continue to stand for that. We go away and we feel like the away team by the referee’s decision on his 50/50 calls and we come at home and we still feel like the away team. I think it’s unacceptable.”

He continues, talking about why he felt this way:

“I don’t know. The only thing I can come up with is one or two reasons. Reason No. 1 is that maybe because our crowd is so raucous and so vocal that the referees feel that they’re a little bit intimidated. Or the second reason is that they don’t respect our team because we haven’t been a team that’s made the playoffs, because we don’t have, I don’t know, the big enough players. Whatever it is for me it has to stop. I just want things to be level and equal.”

He compared calls that were given to Toronto star Jozy Altidore, but not to Orlando striker Cyle Larin:

“The number of times that we’ve had defenders draped all over Cyle Larin in the box and he goes down and we don’t get penalty kicks for that; the number of times we’ve had inadvertent handballs that we don’t get calls for but yet [Kaká] sticks his arm up a few games ago and gets a penalty kick called against him. It’s so many occasions now that I just can’t bear it anymore. The decision for the foul that [Sebastian] Giovinco scores the goal tonight to make the third goal for me was absolutely ridiculous. There’s no chance that our player gets that same foul called and we saw it time and time again tonight where our players were in that exact same position, fell over and did not get that same call.”

When players Kaka and Donny Toia, both didn’t want to talk about the subject, but Toia did speak on wanting things to be fair after all of their hard play:

“I don’t have too many thoughts on that one, to be honest. I leave that for someone else to talk about. I just try to go out and play the game the way it’s supposed to be played and be committed. If I’m fouling somebody, I’m fouling somebody. If I’m not, then great. I’m just going out there trying to do my job the best I can and put in the hard work and be aggressive. Unfortunately sometimes, you’re going to get the wrong calls and you’ve got to deal with it.”