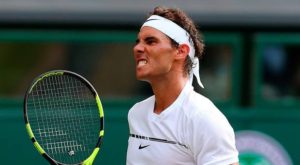 Wimbledon second seeded tennis superstar Rafael Nadal was headed a loss in the second round of the tournament today by Gilles Muller after 5 grueling sets. The thrilling, marathon match lasted 4 hours, 48 minutes.

Nadal, the reigning French Open champion, has not been to the Wimbledon quarterfinals since 2011.