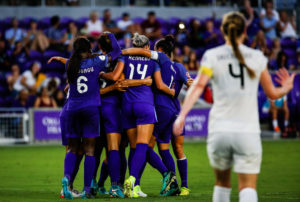 The Orlando Pride treated it’s home fans to an awesome performance, a 4-1 drubbing of FC Kansas City in front of a crowd of over 6,000.

The last time the Orlando Pride played at home in the “Purple Palace” it ended disappointment and a 1-0 loss to the Chicago Stars. The home game before that, an uninspiring 2-0 loss to the Houston Dash. But tonight, things were different.

Marta is solidly ingrained in the team. Alex Morgan is back with the squad and has had a few weeks to spend time with her improved team, making them even stronger. Add in another solid performance by the always dangerous Camilla and the steadily rising star of Chioma Ubogagu and you have a formidable team on the pitch.

“We needed to put on a performance for the people in Orlando, for our supporters and for everybody in the community and I think we did that tonight,” Head Coach Tom Sermanni said.  “I thought our soccer was incisive; we’ve played the way we’ve been trying to play.”

Marta and Alex Morgan came inches from opening the scoring in the seventh minute, but Morgan’s header attempt on Marta’s corner kick sailed just inches over the bar.

The goals came from all over the place. Orlando scored first on a header by Alanna Kennedy from a well placed assist from Marta in the 22nd minute.

Morgan was dragged down at the top of the penalty area by Blues defender Katie Bowen and the forward made no mistakes on the awarded shot, putting in her first goal of 2017. The resulting penalty kick was an easy goal, taking Orlando up 2-1.

But the visitors were able to get one back in the 65th minute when Bowen found second-half substitute Maegen Kelly on a run through the middle.

The two goals would be enough to leave with all three points, but Orlando would not be done scoring, adding two more in the second half.

Defender Toni Pressley continued her strong play and was rewarded with her first NWSL goal in the 70th minute. The Melbourne, Fla. native collected a pass from Camila, taking a couple touches to create a lane and fired a fantastic, bending shot from 25 yards out to make the score 3-1.

The Pride will begin the first leg of a home-and-home series with second seeded Chicago Red Stars next Saturday with a 4 p.m. ET contest at Toyota Park. The game will be aired as the NWSL’s Lifetime Game of the Week. Following a bye-week for the Tournament of Nations, the Pride return to Orlando City Stadium on August 5 to host the Red Stars at 7:30 p.m. ET