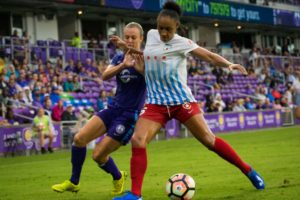 The Orlando Pride came up short last night, losing 1-0 to the Chicago Stars at Orlando City Stadium. Orlando failed to bring home their strong scoring in recent matches (7 goals in the last two games) to their home pitch and came up empty in the nets. It could have been because this was the team’s 3rd game in 7 days.

For the second-straight match, the Pride’s opponent was awarded a penalty kick, this time after a late tackle in the box on Casey Short. U.S. Women’s National Team forward Christen Press stepped to the spot, sending goalkeeper Aubrey Bledsoe to the right and the kick to the left to put the visitors up 1-0 in the 68th minute.

“[I’m] a little bit disappointed, a little bit frustrated. We knew it was going to be a tight game when we talked at halftime. I think we had enough possession to win the game. Whether we created enough with that possession, I’m not too sure,” Head Coach Tom Sermanni said.

The Pride girls had a solid performance with strong defense. They even struck the crossbar of the goal post twice but nothing across the line.

Coach Sermanni continued  “Obviously we hit the woodwork twice. The frustrating bit, what we’ve done in several occasions this year, we have momentum, when we hit the post or just literally scored, then we give a goal away 10 seconds later. We seem to have a tendency to do those things that end up costing us games. [I] can’t fault the effort of the players, we had enough chances to win the game, had enough possession to win the game but one moment of indecision or indiscipline, whatever you want to call it, ended up costing us the game. I would like to say it hasn’t happened often this season, but unfortunately it has.”

Pushing for the equalizer late, the Pride had a flurry of chances after Camila took a stoppage time corner kick. The second-half substitute drove the ball to the far post and Bledsoe – who pushed up to load the penalty area – put the ball on net only to have Chicago midfielder Danielle Colaprico clear it off the line. The ball scattered around the box before defender Ali Krieger had a go, blasting her left-footed volley off of the crossbar.

Coming off the bench for the first time this season, Camila provided an injection of energy to the Pride lineup after her introduction in the 56th minute. With 15 minutes left to play, the Brazilian intercepted a long ball from Chicago goalkeeper Alyssa Naeher and used a burst of speed to claim space, but her shot from the top of the box whistles just wide to the left. Despite playing just 34 minutes, Camila led the Pride offense with four total shots. 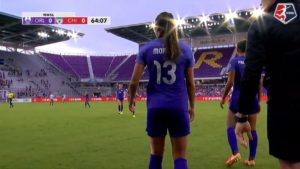 Forward Alex Morgan made her first appearance of the 2017 season for the Pride, entering the match in the 65th minute and bringing the home crowd to their feet. Morgan nearly setup Alanna Kennedy’s second goal of the season, heading on a cross to the mouth of the goal but the center back’s aerial win against Naeher sailed over the bar.

The Pride will return to national television next weekend as Orlando travels to the Washington Spirit for Krieger’s first match against her former team. The match will kickoff at 3:30 p.m. ET and will be broadcast on Lifetime.