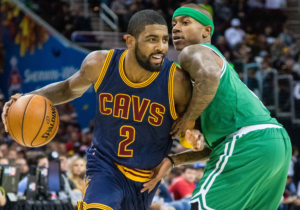 Kyrie asked to be traded from ‘Team LeBron’. Tonight, he got his wish.

The Cavaliers stay strong in the present while acquiring young players and a draft pick from the rebuilding Nets in the next NBA draft.

Boston no longer has to worry about Thomas’ upcoming free agency and rumored desire for a max contract, while staying strong at the point guard position and setting up whitings nicely for their 1017-18 season run.

Irvin expressed the desire to be traded earlier this summer. Reasons were floated that he was tired of playing in mega-star LeBron James shadow and wanted to ‘run his own show’. James, who had one year left on his contract, is expected to leave Cleveland at the end of the season. this would have left Irving in a rebuilding situation with yet another year on this contract.

The teams see each other in the regular season opener in Cleveland on October 17th.