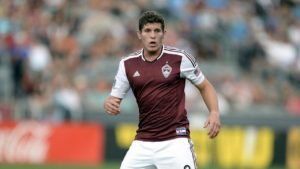 “Dillon is a creative midfielder who has proven himself in this league over the past four seasons,” Orlando City General Manager Niki Budalic said. “We are pleased to add more depth to our midfield with this trade and look forward to integrating Dillon into the team.”

The 26-year-old midfielder joins the Lions after featuring for the Rapids since the 2013 campaign, making 139 overall appearances and registering 14 goals and 26 assists.

After being selected 11th overall in the 2013 MLS SuperDraft from Notre Dame, Powers earned 2013 MLS Rookie of the Year and was awarded 2013 Rapids MVP honors by scoring five goals and adding six assists in 30 appearances.

The Plano, Texas, native followed up his award-winning rookie season by leading the team in assists the following two years, registering nine and six assists, respectively. In 2016, the midfielder made 29 regular season appearances and recorded one goal and four assists to help the Rapids finish second in the Supporters’ Shield race before playing in the three games of Colorado’s run to the Western Conference final.

Powers also received the club’s Humanitarian of the Year in 2016 for his work in the community and with the Special Olympics Unified Team.

This season, Powers has played 15 of the Rapids’ 21 fixtures, including their 2-0 loss at Orlando City Stadium on April 29.

On the international stage, Powers made 18 overall appearances for the U.S. U-18 and U-20 sides, including features at the 2009 FIFA U-20 World Cup in Egypt.

Gil joined the Lions on a season-long loan from LigaMX side Querétaro Fútbol Club on April 6 and made 17 appearances, six of them starts.

“We would also like to thank Luis for his time with our Club and wish him the best in the future,” Buladic added.