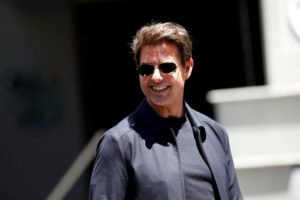 Actor Tom Cruise. was injured on set in London Sunday while filming a stunt for “Mission: Impossible 6,” the latest flick in his blockbuster franchise, according to video obtained by TMZ.

In the video, Cruise, 55, can be seen leaping off of a platform onto the roof of a building, but coming up just short, crashing into the side of the building instead of landing on top of it.

He attempts to continue the scene, but limps for several steps before collapsing. He is eventually pulled away by members of the crew.

The extent of the star’s injuries are unknown.

Cruise is well-known for doing his own stunts in his action-packed films, and in 2015, made headlines for a particularly death-defying scene that found him hanging off the side of an airplane.

“I do everything I can do to entertain the audience,” he said at the time. “I told them, ‘Don’t stop filming.’ I was hit by a tiny particle from the runway and I literally thought it broke my ribs.”