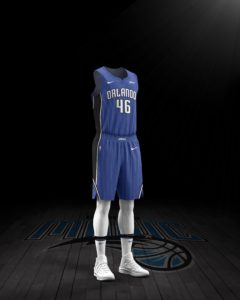 Orlando, Fla. (September 5, 2017) – Elite design. Classic look. The Orlando Magic unveiled two of its four new Nike uniforms today, “Association” and “Icon.” These uniforms will replace the white and blue traditional home and road sets. Beginning in the 2017-18 NBA season, home teams can pick which of their uniforms will be worn at home games and visiting teams will choose a contrasting uniform within their own assortment.

Nike’s “Association” Edition, previously the traditional home white uniform worn by all 30 teams, serves as a link to one of the most exclusive basketball clubs in the world. It represents an achievement that most athletes have worked their entire lives to reach. The Magic’s “Association” look will remain classic, keeping the team’s iconic pinstripes on the white uniform. The “Icon” Edition, previously known as the road uniform, represents the heritage and iconic identity of each NBA franchise. Highlighting each team’s identity, this edition for the Magic also focuses on the legendary pinstripes in the blue Magic uniforms. 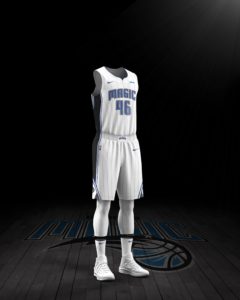 The uniforms were developed through a collaborative effort between the NBA, its players, and Nike. The uniforms are comprised of recycled PET bottles, a combination of Alpha Yarns and recycled polyester (each uniform represents approximately 20 recycled bottles). This modernized, sweat-wicking, sustainable design has a vastly improved fit with altered construction and hemlines on the shoulder, along with the bottom of both the jersey and shorts allowing for a full range of motion.

The Magic will debut the new Nike uniforms during the 2017-18 season. The final two Magic uniform designs will be unveiled later in the season.