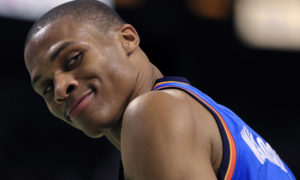 NBA phenom Russell Westbrook signed a contract extension with the Oklahoma City Thunder for 5 years and a record $205 million, the largest guaranteed contract in NBA history. Westboork, the 2017 NBA MVP, also had a little cherry on top of his $205 million sundae: He signed it on rival Kevin Durant’s birthday.

Durant fought side by side with Westbrook in OKC for years, and after losing a 3-1 series to NBA juggernaught Golden State Warriors in 2015-16, Durant decided to switch sides for a championship by joining the Warriors and leaving Westbrook in the lurch.

Westbrook responded by having a record breaking 2016-17 season and winning the MVP award.

OKC has set up for the 2017-18 season by adding all star forwards Paul George and Carmello Anthony, presenting an offensive powerhouse for the up coming season.

With questions about Westbrook and his future with the Thunder, Westbrook picked the perfect day to sign the record breaking deal and set the tone for the upcoming season.