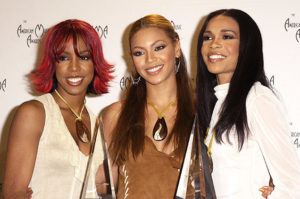 Michelle Williams, former member of the power group Destiny’s Child, recently opened up about her struggles with depression during the height of the groups popularity.

While guest co-hosting The Talk on Wednesday, the singer, 37, revealed she was suicidal while sitting at the top of the charts with the rest of the girl group, which included Beyoncé and Kelly            Rowland.

“I’m in one of the top-selling female groups of all time, suffering with depression,” she said on the show. “When I disclosed it to our manager [Mathew Knowles] at the time, bless his heart, he was like, ‘You all just signed a multi-million dollar deal. You’re about to go on tour. What do you have to be depressed about?’” she recalled.

“So I was like, ‘Oh, maybe I’m just tired,’” she continued. However, Williams’ depression only continued to get worse “to the point where I was suicidal … and wanted out” from the group.

Williams had success on her own, outside of the group. During a 2002 hiatus, she released her debut solo album Heart to Yours, which topped the US gospel album chart and became the best-selling gospel release of the year. Billboard, named her the fifth Top Gospel Artist of the year and she garnered three Grammy nominations for her work on the album including for Best Gospel Album.

After Destiny’s Child’s disbanded in 2006, Williams released her first pop album, Unexpected (2008), which spawned the internationally charting single “We Break the Dawn”. In 2014, Her fourth studio album, Journey to Freedom  became her highest-charting album in the US; preceded by lead single “If We Had Your Eyes” which reached the US Adult R&B top 20 and “Say Yes”, charted internationally and topped the US Hot Gospel Songs chart for seven weeks.

After the show, Williams tweeted:

“Thank you @TheTalkCBS for being a safe place to talk about #depression #mentalhealthawareness!! Don’t be afraid to reach out for help!”