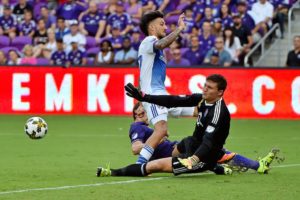 Orlando City returns to the pitch this afternoon looking to make franchise history for the second time this week.

Saturday’s match against FC Dallas is Orlando’s 100th MLS Match. The team joined the MLS in 2015.

On Wednesday, the Lions scored a team record 6 goals to blast New England 6-1. They should have saved some for today as we well was dry as Orlando and FC Dallas battled to a 0-0 draw in front to 24,000 fans. 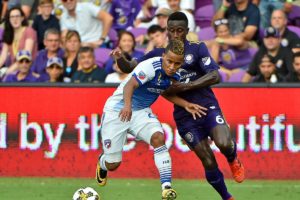 FC Dallas is a team that they not only never defeated, but have never even scored a goal or point against. Orlando wanted 3 points from a victory to keep them in this year’s playoff story. The team’s playoff hopes are still alive as the Red Bulls lost to Toronto FC last night. The draw would give Orlando it’s first standings point against Dallas, but they desparately needed the 3 points that come with a victory.

With this game having a 4pm start time, the Central Florida heat proved to be a major factor, causing both teams to take hydration breaks in the first and second half.

“The truth of the matter is that I’m pleased with the performance.Really, really pleased with the efforts that the group put out.” Said Coach Jason Kreis. “I knew it was going to be a difficult day. It’s hot out there today, it’s our third game in a week, we’ve had to travel all the way to Portland and back in the last week. A lot of considerations for why the performance wasn’t quite as energetic as I would’ve liked it to have been. But at the end of the day the guys gave everything they had and I think can feel very proud of what they put into that game.” 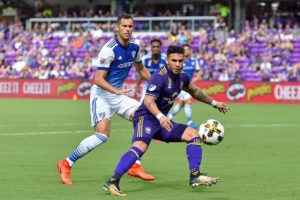 Both squads came out with a slow paced performance. FC Dallas controlled the majority of possessions in the match, particularly in the first half. After the normal Orlando pressure on the opponent defense, the squads but fell back more and took thier chances. Both squads proved to be more than capable defensively and any goal scored would have to be well earned.

The Lions came closest to finding a winner in second-half stoppage time through a pair of Yoshimar Yotun chances, but FC Dallas goalkeeper Jesse Gonzalez made big saves to keep the match scoreless.

Coach Jason Kreis substituted Richie Larea, Cyle Larin, and Carlos Rivera onto the pitch later in the second half to provide some energy and add scoring power to Kakà, Dom Dwyer and Giles Barnes. It put more pressure on the Dallas defense, but they were able to hold.

In this match, Video Assistant Referee Sorin Stoica did not notify referee Armando Villarreal that he should review two potential game-changing apparent handballs after neither was called on Orlando’s Hines and Dallas’ Matt Hedges inside the box, sending fans into a frenzy .

The MLS has a two week International Play break before the teams return to play. Orlando returns home for the final time in 2017 when they host Columbus Crew SC on Sunday, Oct. 15, at 7:30 p.m. ET.