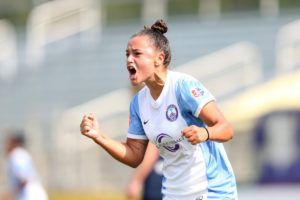 Orlando Pride midfielder Camila Martins Pereira has been ruled out for the remainder of the 2017 National Women’s Soccer League (NWSL) season after suffering an anterior cruciate ligament tear (ACL) and medial collateral ligament (MCL) sprain in her right knee during Saturday’s 3-2 win over the North Carolina Courage.

The Brazilian international was evaluated by the Club’s medical staff at Orlando Health after sustaining the injury during the 32nd minute of Saturday’s match.

Camila was a key component of the teams 2017 success by always putting pressure on the opponents defense along with Superstars Marta and Alex Morgan. The Pride made the playoffs for the first time in club history, locking 3rd place the Carolina win.

The Pride will be preparing all week for the biggest game thus far in the club’s short history. A Semi-final matchup with the Portland Thorns will be a massive test for Orlando. the effect in losing Camila has yet to be seen.