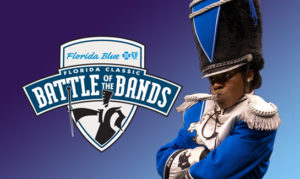 The 2017 Florida Blue Florida Classic Battle of the Bands took place Friday night at the Amway Center in Orlando, FL.

10 high school bands from throughout the country performed programs in showtime band style followed by performances from the stars of the weekend, the Bethune Cookman Marching Wildcats and The Marching 100, from Florida A&M.

The Battle of the Bands is an annual event, part of Florida Classic weekend which culminates with the football game between historical black colleges Florida A&M and Bethune Cookman Universities. The events this year started on Thursday with a kickoff show featuring comic Cedrick the Entertainer at the Dr Phillips Center. Friday was a busy day for The Classic, which included a Career Expo and Diversity Job Fair at the Amway center, as well as the annual Kickoff Luncheon sponsored by Florida Blue. 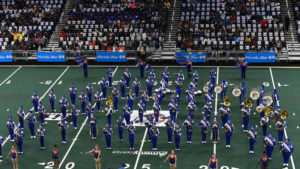 The high schools brought their best, with several playing renditions of Bruno Mars tunes as well as R&B classics from Earth Wind & Fire and Chaka Kahn. High stepping, dancing, and splits made by the entire band were the norm. 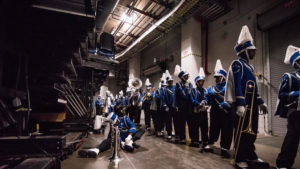 Local bands from Edgewater High School, Palm Bay’s Heritage High School, and Mainland High School from Daytona Beach represented Central Florida. Edgewater Was an unusual entry as locals are used to the showtime style of Jones High School and Maynard Evens High School, but the band put on a show and showed that they belonged.

After the 10 high school bands performed, the massive Percussion section from Bethune Cookman took the field. They were followed by the Bethune Cookman Marching Bad, which was so large they had trouble fitting onto the entire arena floor. 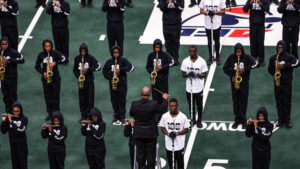 The Florida A&M 100 percussion section performed next, followed but the FAMU band. FAMU band director Dr Shelby Chipman made and announcement that the band would be marching in the 2019 Tournament of Roses Parade in Pasadena, Ca and recognized donors. The 100 also recognized senior band members during their performance.

This event is a preview of chat both bands have in store for fans at the actual Florida classic game taking class at 2 pm at Camping World Stadium today.