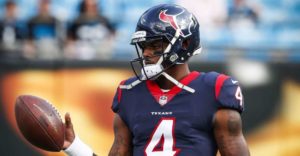 NFL Network’s Ian Rapoport tweeted that it was a non-contact injury. ESPN’s Adam Schefter tweeted that tests at the Texans’ facility confirmed the injury.

John McClain, the longtime Texans beat writer for the Houston Chronicle, reports that Watson will undergo season-ending surgery, and Tom Savage will start this week for Houston against the Colts.

The 12th overall pick this year out of Clemson, Watson has been starting for Houston since Week 2.

He’s worked his way into the rookie of the year conversation with his thrilling play and calm under pressure – on Sunday in Seattle, one of the most difficult road stadiums for any visiting quarterback because of the noise level, he went toe-to-toe with the Seahawks defense and their quarterback, Russell Wilson.

Watson threw for over 400 yards and four touchdowns; he did have three interceptions, though one came on a late desperation heave as he was trying to get his team one last score.

Almost as important as his play, Watson has been great off the field. He donated his first NFL paycheck to three workers in the team’s cafeteria who suffered great losses in Hurricane Harvey, and helped furnish 176 homes affected by the hurricane in partnership with Ashley Furniture. Watson’s family received a home through Habitat for Humanity when he was younger, and he’s seemingly made it his mission to pay that forward.