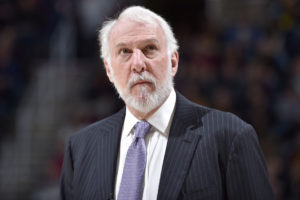 Gregg and Erin Popovich were married for four decades and have two children and two grandchildren. Erin had been ill for an extended period of time, ESPN reported, though the details of her condition are unknown.

“We mourn the loss of Erin,” Spurs general manager RC Buford said in a statement. “She was a strong, wonderful, kind, intelligent woman who provided love, support and humor to all of us.”

The Spurs play the Warriors in Game 3 Friday night in San Antonio, already down 2-0 in the first-round playoff series. As of Wednesday night, it was unknown whether Popovich, who has coached the team for 22 years, would be on the sidelines.