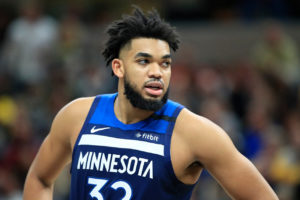 Jacqueline Cruz, the mother of Timberwolves star forward and New Jersey native Karl-Anthony Towns, passed away on Monday afternoon due to complications from the novel coronavirus, the team announced on Twitter.

“The family is devastated by their tremendous loss, and respectfully requests privacy in this time of great mourning,” the Timberwolves said in a statement.

She had been battling the virus for more than a month before succumbing. Cruz had been placed in an induced coma, her son said recently on Instagram.

“Jackie was many things to many people – a wife, mother, daughter, grandmother, sister, aunt, and friend,” the Timberwolves said. “That matriarch of the Towns family, she was an incredible source of strength; a fiery, caring and extremely loving person who touched everyone she met.”

The 24-year-old Towns had donated $100,000 to the Mayo Clinic in the wake of the pandemic. He starred at St. Joseph’s of Metuchen and later Kentucky before being taken first overall in the 2015 NBA Draft. His father, Karl Towns Sr., also contracted coronavirus, but was said to be doing well while in quarantine.