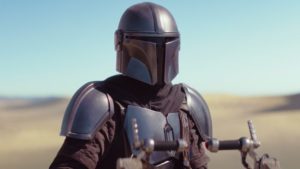 May the Baby Yoda memes be with you.

If you can’t get enough of the adorable green creature, now you don’t have to wait until Season 2 of “The Mandalorian.”

On May 4 (a k a May the Fourth Be With You Day), Disney+ will launch an eight-episode docuseries about the making of the breakout hit show called “Disney Gallery: The Mandalorian.”

Hosted by “Mandalorian” creator and executive producer Jon Favreau, the docuseries will feature never-before-seen footage, interviews with the cast and crew, and behind-the-scenes technical tidbits of the first “Star Wars” live-action series.

Does this mean Baby Yoda will give an interview? Probably not, but we might learn more about the creation of the little green puppet who took the world by storm.

“ ‘Disney Gallery: The Mandalorian’ is an opportunity for fans of the show to take a look inside and get to see a different perspective, and perhaps a greater understanding, of how ‘The Mandalorian’ came together and some of the incredibly talented contributors throughout Season 1,” Favreau told the Hollywood Reporter.

“We had a great experience making the show, and we’re looking forward to sharing it with you.”

Rosario Dawson is set to play a new character,Ahsoka Tano, in Season 2, which completed its filming before the coronavirus shut-down, according to Variety.