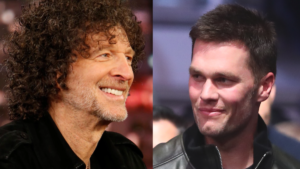 Tom Brady opened up in a radio interview with the controversial radio host Howard Stern today. The future hall of fame quarterback talked for nearly two hours with Stern on his sirius XM show this morning and went through a number of subjects ranging from when he knew his time with the New England Patriots was over to how he met his wife, supermodel Giselle Bundchen.

— The 42-year-old discussed his football progression where he did not even play until high school and even when he started he wasn’t the best player. Also discussed was Brady’s time at Michigan when he had to earn his playing time and he admitted there was a point in time he thought about transferring, but he changed his attitude and made a commitment to be the best.

— Even though Brady was drafted by the Montreal Expos, he said he wasn’t even the best player on his high school baseball team.

— He clarified he did not tell Robert Kraft after the Patriots drafted him in 2000 that it was the best decision the organization ever made, as is the rumor. Brady actually said, “You’ll never regret picking me.”

— Brady said dealing with adversity over the course of his career helped make him into the player and person he is today.

— Brady: “School was a lot harder for me (than sports) because I didn’t have much of an interest in school. … I was smart enough to get by giving very average effort.”

— On comebacks: “We were down 28-3 against Atlanta in Super Bowl 51. You can look at that situation and basically quit and say, you know, ‘(Expletive) it. We have no shot of winning,’ or you can say ‘This is going to be an amazing comeback. When we come back from this, this is going to be the defining moment in life,’ or a defining moment in a professional career. “I think when you shift your mind and think that way, it becomes very empowering as opposed to very discouraging. So anytime we’re down in a game, I think, ‘Man, if we come back and win this game, we’re the hero,’

— On not partying, smoking and drinking much in high school: “I always thought I was letting my dad down.” He acknowledged he did drink and smoked weed in high school at times.

— Brady explained what he told Bill Belichick when a receiver wasn’t able to do what he wanted him to: “I don’t have any trust that this guy can help us win the game. If you put him out there, I’m not going to throw him the ball.” Added: “He saw football in the same way I did. We saw the process of winning the same way.”

— He said he has no resentment towards Belichick and the Patriots for not making him a Patriot for life. He did say he cried when he told Robert Kraft and Belichick that he was leaving New England. “I’m a very emotional guy,” he said.

— On going to Tampa Bay: “I never cared about legacies. I could give a (expletive). … That’s not me, that’s not my personality. Why did I choose a different place? Because it was just time.”

– The 42-year-old doesn’t like the debate of who deserves more credit for the Patriots’ success — himself or Belichick. “I think it is a pretty (expletive) argument, actually. I can’t do his job and he can’t do mine.”

— He said he knew going into last season that it was probably his last year with the Patriots.