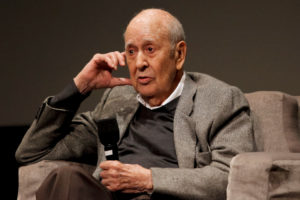 Carl Reiner, the comedy legend behind some of TV’s most beloved series, died Monday night at his home on Beverly Hills. He was 98.

His family was with him when he passed, TMZ reports. He died of natural causes, his assistant Judy Nagy confirmed to Variety.

Born in the Bronx in 1922, Reiner graduated from high school early at the age of 16 — and worked as a machinist while studying his eventual craft.

The prolific comedian, actor, screenwriter and director’s career eventually spanned more than seven decades, and started with groundbreaking work in live television classics such as “Your Show of Shows.” He co-wrote and acted on that Sid Caesar vehicle from 1950 to 1957 before segueing into an onscreen role in his best-known project: “The Dick Van Dyke Show.”

Before his years in entertainment, Reiner, a Georgetown University grad, served his country in World War II, an experience documented in the 2018 PBS documentary “GI Jews: Jewish Americans in World War II.”

“I was sleeping on an upper bed when I heard a voice from the other side of the room,” Reiner told The Post at the time, slipping into a thick Southern accent. “ ‘Reiner? Are you a Jewwww?’ I said, ‘Yes, why do you ask?’ He says, ‘Do you know a man named Goldfarb?’ I said, ‘No, where is he from?’ He says, ‘He’s from Shreveport. He owns a grocery store. He ain’t a bad guy. You don’t know him?’ He figured all Jews knew each other.

“That was also the first time I encountered racism,” Reiner said. “We were taking a signal battalion course and there was a black battalion — they didn’t have their own barracks so they were upstairs in our barracks, but we used the same toilet. One day I was peeing next to one of the black soldiers and when I got back to my foot locker, the guy next to me said, ‘You know who you were talking to? You notice he’s a [N-word]? You think a [N-word] can be smarter than a white man?’ I said, ‘Well, offhand, what about [actor] Paul Robeson?’ who spoke several languages, including Russian. He’d never heard of him. ‘I speak American,’ he said.”

“We knew how important it was for us to be there,” Reiner told The Post.

Among the many awards Reiner would go on to take in his storied career are nine Emmys, one Grammy and the Mark Twain Prize for American Humor.