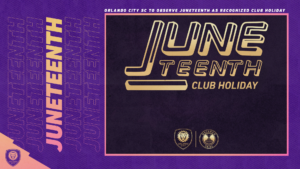 The Club, which recently denounced racism, systemic injustices and vowed to do more, is proud to join its employees and many other organizations across the country in celebrating and reflecting on this important day in United States history.

Juneteenth is the oldest nationally-celebrated holiday which honors African American freedom in the US. Recognized annually on June 19, Juneteenth marks the anniversary of the same day in 1865 — two and a half years after the Emancipation Proclamation — when Union soldiers arrived in Galveston, Texas to announce the Civil War had ended and the country’s remaining enslaved people were freed.

In addition to recognizing Juneteenth, the Club will continue to create a constructive dialogue with vital members of Orlando’s black and minority communities, and will strive to make meaningful differences through its actions – both within the Club and in the greater Orlando area.