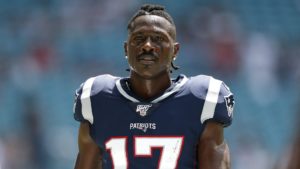 The NFL has released an official statement regarding Antonio Brown and the investigation into an accusation of sexual misconduct at his home by an artist who was working there in 2017. He also pleaded no contest in June to a felony burglary with battery charge and two lesser misdemeanor charges related to a January incident with a moving truck company outside his home in Hollywood, Florida.

Here is the NFL’s Official Statement:

“Antonio Brown was notified today by NFL Special Counsel for Conduct Todd Jones that he has been suspended without pay for the first eight regular-season games of the 2020 season for multiple violations of the NFL’s Personal Conduct Policy.

Brown, who played one game in the 2019 season for the New England Patriots before being released, is an unrestricted free agent and may sign with any team. If he is signed before the start of the 2020 season, Brown would be eligible to participate in all of his club’s preseason activities. Brown’s suspension would take effect as of the final roster reduction on September 5. He would be eligible to return after the team’s eighth game.

As part of the discipline, Brown was directed to continue his program of counseling and treatment, and that he is expected fully to cooperate with his clinicians.

Brown was advised that any future violation of the Personal Conduct Policy will likely result in more significant discipline.  “