LOS ANGELES -After a decade without a team, California is welcoming back women’s professional soccer.

The National Women’s Soccer League announced on Tuesday that Los Angeles has been granted expansion rights, giving the NWSL its first California team. The team doesn’t yet have an official name, but is currently going by “Angel City.”

The ownership group is led by entrepreneur Julie Uhrman, venture capitalists Kara Nortman and Alexis Ohanian (Reddit founder and husband of Serena Williams), plus actress and activist Natalie Portman. The rest of the ownership group is full of powerhouse women. It includes Serena and her two-year-old daughter, Olympia (who is now the youngest owner in professional sports), as well as talk show host Lily Singh and actresses Jennifer Garner, Uzo Aduba, Jessica Chastain, America Ferrera, and Eva Longoria. 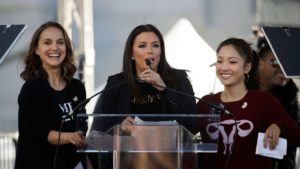 The Angel City ownership group also announced on Tuesday that they’ve partnered with the LA84 Foundation to support their Play Equity Fund. According to the press release, “the Play Equity Fund is committed to driving access to sports for underserved communities, including communities of color, girls, the physically challenged and developmentally disabled.”

Portman is not known for her connection to sports, but has been outspoken about the gender pay gap in Hollywood. Last year she supported USWNT players fighting for pay equity in professional soccer as part of Time’s Up. In the press release, Portman highlighted her commitment to advancing women in sports.

“Today we take an exciting step by announcing the first women majority-owned and led ownership group,” Founder Natalie Portman said. “I am thrilled by the opportunity to partner with this incredible group of people to bring a professional women’s soccer team to Los Angeles. Together, we aim to build not only a winning team on the field, but also to develop a passionately loyal fan base. We also hope to make a substantive impact on our community, committing to extending access to sports for young people in Los Angeles through our relationship with the LA84 Foundation. Sports are such a joyful way to bring people together, and this has the power to make tangible change for female athletes both in our community and in the professional sphere.”

The franchise, which will be the NWSL’s 11th, will begin playing in 2022. The official name and the venue partner will be announced by the end of 2020.