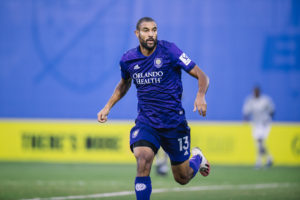 KISSIMMEE, FL – Orlando City SC defeated the Montreal Impact 1-0 in the first Knockout Stage game of the MLS is Back Tournament at Disney World.

Tesho Akindele touched in a goal in the 60th minute when both Impact goalkeeper Clement Drop and defender  chased after a Mendes touch pass to Alindele who basically had an open goal.

Now awaits the winner of the Seattle- LAFC match on July 27th.