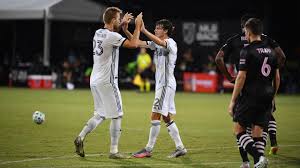 LAKE BUENA VISTA, FL -The Philadelphia Union took down Inter Miami CF 2-1 in the third group A match of the MLS is Back Tournament at the ESPN Wide World of Sports Complex at Disney World.

The loss gave the union 6 points and advanced them to the next round along with Orlando City SC.

Kai Wagner scored scored early in the match (5′) for Philly when ho took a Brendon Arenson pass and scored with a left footed shot from outside the box to the bottom right corner, giving the Union a 1-0 lead. 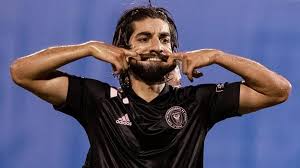 Miami managed to even things out when Inter’s Mexican Star Rodolpho Pizarro collected a feed from Matias Pellegrini and poked the ball past Blake to finish off a well-worked counterattack.

The Union’s  Kacper Przybylko managed to give Philly the lead on a counterattack of their own which culminated with the Polish forward placing a clinical finish past Robles.

Miami had a a few more close calls in the second half, even a called handball that would have meant a penalty kick, but video review turned the call over. 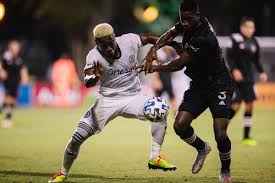 Inter Miami is still looking for it’s first win as an expansion team. This must be one of the mostt difficult opening seasons in MLS history.

Miami next faces NYCFC on Monday July 20th, while Philadelphia goes against Orlando City on the same date.