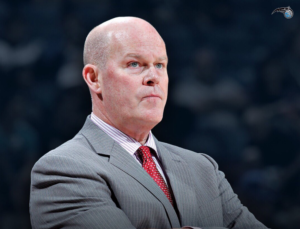 As the NBA restart creeps up the calendar, and players look nervously at the COVID-19 numbers in Florida before flying down into what might be the new epicenter of the pandemic, Coach Steve Clifford of the Orlando Magic sits ready for the next evolution of the 2019-2020 NBA Season.

As Clifford spoke to the media via a Zoom conference call on Tuesday, he spoke about his team, his concern about the lack of masks being worn, and more importantly, how the NBA Coaches and the league are really focuses on trying to make a social impact as a key factor in the return of NBA Basketball.

Clifford and the Coaches asocial have ben working with the Obama Foundation as well as Brian Stevenson and the Equal Justice Initiative to discover how they can work to make an impact on social change.

Stevenson, who is depicted as the young lawyer in the film Just Mercy, has a long history of activism work, and gave the NBA coaches and staff insight about the fight for racial justice.

Clifford and the other coaches see how it isn’t a time to stand by and watch.

`You have to figure where you’re at as a person and for me, right now, it’s not a time to be neutral,’’ Clifford said in the call. “You’re either going to be a part of positive change where you are going to be proactive, be involved in it and work toward it and spend part of your day with it or you’re not. I’m probably like a lot of people where in the past there have been things that have bothered me, but in self-reflection of looking back, I never did a lot to make it any better. Now, I’m determined to be a part of that positive change.’’

“Our organization has been looking into ways where we could help. We’re looking for areas where we can make positive change, like with the voting and police accountability.” Clifford said. “We’ve been working on education and understanding racism, that’s a big part of it. We have to change the rules so that everyone does have a chance at better occupations or housing.. That’s what were working to get to.”

Clifford has seen his players practice, and like what he sees. He likes the player’s enthusiasm, and is glad that they did the work during the shut down.gic and finally r

Clifford also said that he has no idea of what he will be looking at once the workouts start. He doesn’t expect the Magic to be able to go 5 on 5 right away and knows that they will need a few days to work on conditioning.

When asked about the run the magic had towards the end of the season, he is encouraged by where the season left of and hopes that the guys retained some of the lessons learned through the course of the season.

The Magic had improved their offense after the all-star break, but their defensive numbers suffered from the change. The Magic had finally righted the ship when the season abruptly stopped. Hopefully some of that stuck with them.

“The amount of study and planning that went into this has been incredible.” Clifford said. “We’ve been taking all of the precautions. I work out with the guys. We wear masks, gloves, after each player we switch the balls after each work out.”

Adam Silver says that this will be one of the safest places in the country.

To prep for the isolation, Clifford has been talking to people that have experience working with teams and different personalities. People like Stan Van Gundy, Steve Nash, and even Washington football coach Ron Rivera. “There really isn’t a blueprint for this”

“Not having fans will be so difference for all of us, especially in the playoffs.” Said Clifford. “Home fans make a big impact. It makes a big environment. Teams will have to make their own engouragemt and feed off of each other.”

Clifford also mentioned that Jonathan Isaac and Al Farouq Aminou are working out, but says it’s still too soon to know if they will be ready for the contact of play.