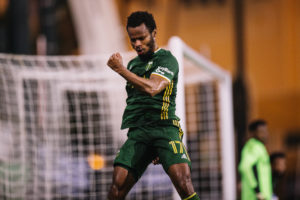 KISSIMMEE, FL – The Portland Timbers defeated the Philadelphia Union 2-1 in last night’s MLS is Back semifinal match at the ESPN Wide World of Sports Complex at Disney World.

Portland jumped out ahead early when Jeremy Ebobisse easily put in a Diego Valeri pass in the net past Andre Blake, stunning Philadelphia in the 13th minute for the early lead. Kai Wagner was caught ball watching when Ebobisse made the score.

In the 70th minute, the Timbers added some insurance when Sebastian Blanko scored off of a flick of a touch by Dario Zuparic, putting it into the net for the eventual game winning score. 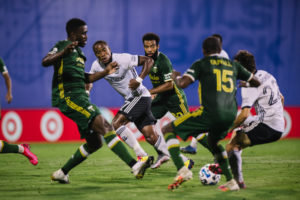 Portland’s tight defense left little space for Philly to operate, even after the brought in Ilsinho to spark the offense.

The Union manage to make it  a game with a score by Andrew Wooten in the 85th minute. a Jamiro Monteiro curling free kick was selected and Wooten got the chance and put it in making it 2-1 late in the match.

The Union thought they had an equalizer in the 86th minute when Brenden Aaronson slipped Kacper Przybylko through. The German striker finished past Clark from close range, but he was deemed offside by the smallest of margins. 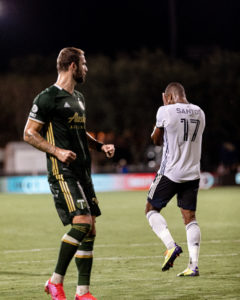 Philly could have made it a 1-1 match before the half when Sergio Santos had a golden opportunity penalty kick. It was Santos’ first ever PK try, and he unfortunately botched it, sending soaring over the crossbar, not even close.

Portland will face either Minnesota United or Orlando City next Tuesday in the championship match 8:30 pm ET. Minnesota and Orlando face off tonight in the other semifinal match at 8pm ET.