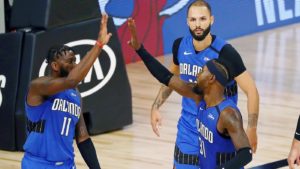 ORLANDO, FL – The Magic stunned Milwaukee in Game 1 of the series opener, defeating the Bucks comfortably 122-110. Last year in round 1 of the playoffs, these two teams faced off where the Bucks swept Orlando 4-0 by an average of 17 points.

Nikola Vucevic led all players with a double-double of 35 points, 14 rebounds, while shooting 5-8 from three-point range. The reigning MVP, Giannis Antetokounmpo equally pulled no punches dropping a double-double of his own, 31 points, 17 rebounds while adding 7 assists.

The story of the game, however, was the supporting cast play of both teams. Whereas Orlando’s supporting cast left their fingerprints all over this afternoon’s matchup, the Bucks cast seemingly disappeared.

Vucevic received a copious amount of help. Terrence Ross led the bench with 18 points, followed by Fultz and Gary Clark who poured in 15 points each, and James Ennis had 11. However, the most important member of the supporting cast tonight was D.J. Augustin who had his own double-double of 11 points and 11 assists. Augustin was responsible for the smooth flow of Orlando’s offense, consistently making correct reads which resulted in points.

Orlando was not only firing on all cylinders offensively, their defense, a staple of head coach Steve Clifford, was on full display. In the last 11 minutes of play in the 4th, Giannis was held without a single field goal.

Before the season went on hiatus, the Bucks had shown cracks in their style of play and failed to put those concerns to bed, going just 3-5 in the bubble.

Yet despite the sub-par bubble record, the Bucks entered the playoffs as Eastern Conference title favorites. If they’re to actualize their expectations, Giannis is going to need far more help than he received tonight, notably from Kris Middleton who struggled with just 14 points on 4-12 shooting.