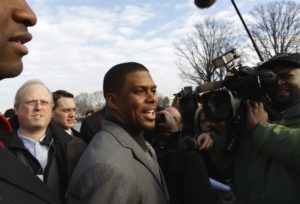 The Washington Football Team has made a significant hire.

The franchise announced Monday morning that it has hired Jason Wright as team president, making Wright the first Black team president in NFL history. Wright, 38, played seven years as a running back in the NFL before earning his M.B.A. in business and working the past seven years at McKinsey & Company, an international consulting firm.

Now Wright becomes the youngest president in the NFL and will be tasked with leading Washington’s business divisions — including operations, finance, sales and marketing, per a team release — while reporting directly to team owner Dan Snyder alongside head coach Ron Rivera.

Wright replaces Bruce Allen, who was fired in 2019 after a lengthy stint with the organization. Allen, for the latter half of his tenure, oversaw both football and business operations of the franchise. Wright will oversee only business while Rivera controls “on-field responsibilities and football decisions,” the team said.

A turbulent time in Washington

Wright arrives at a franchise embroiled in turmoil. Snyder is in the process overhauling his franchise — both in name and in culture. After years of resistance, Snyder announced last month his franchise would move away from its longstanding and controversial nickname, the Redskins. While a new name and logo are on the way, the franchise is also reeling from a Washington Post story documenting an array of former female team employees who described widespread sexual harassment throughout the organization. A law firm hired by Snyder is currently investigating those claims.

“If I could custom design a leader for this important time in our history, it would be Jason,” Snyder said in a team press release. “His experience as a former player, coupled with his business acumen, gives him a perspective that is unrivaled in the league.”

Added Wright: “This team, at this time, is an ideal opportunity for me. The transformation of the Washington Football Team is happening across all aspects of the organization – from football to operations to branding to culture – and will make us a truly modern and aspirational franchise.”

In a Monday interview with Good Morning America, Wright acknowledged the challenges ahead but said he is encouraged by the franchise’s recent actions and plan moving forward.

“We had a phrase when we played: ‘You don’t talk about it, you be about it.’ What I’ve seen from Dan and Tanya Snyder and the hiring of coach Rivera and some of the decisions they’ve made, there are actual shifts in action that suggest it’s a new day. That’s why I’m excited to take this on,” Wright said.

Wright spent time with the San Francisco 49ers, Atlanta Falcons, Cleveland Browns and Arizona Cardinals after a standout career at Northwestern. He notably served as Arizona’s union representative during the 2011 NFL lockout. He retired in 2011 to attend the University of Chicago’s business school before landing a role at McKinsey. According to a team release, Wright played a key role in creating McKinsey’s Black Economic Institute, helping with the firm’s anti-racism and inclusion strategy.