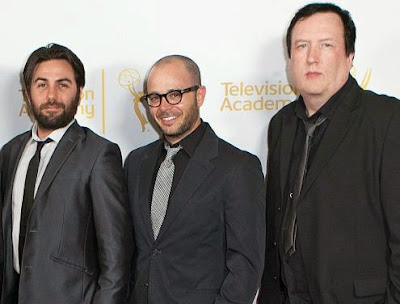 J.J. Abrams (Lost, Fringe), Joss Whedon (Buffy the Vampire Slayer), Terence Winter (Boardwalk Empire), Shawn Ryan (The Shield), Damon Lindelof (Lost) and countless others shift from behind the scenes to become the focus of a new documentary, Showrunners: The Art Of Running A TV Show. The doc offers numerous first-hand accounts of what it takes to get a TV show on the air and features a backstory that is almost as equally fascinating. Director Des Doyle and Co-Producer Ryan Patrick McGuffey, both natives of Ireland, sat down recently to discuss the arduous journey of bringing this film to life. For anyone who has ever truly pursued the dream of making a film, they know it comes with costs attached. “The lucky thing about being a first-time director is that naiveté can make you unaware of just how big a challenge you’ve set yourself,” says Doyle with a hearty chuckle.

“For my first film, I wanted to tell the story of the people who wrote and created one of the things I love most in life: American TV dramas and comedies. I had been fascinated by the role of the showrunner for many years and had voraciously read or watched everything I could about them,” Doyle adds. “But frustratingly we couldn’t find anyone asking them the questions that I really wanted answers to, which were more about the specifics of the job itself and less about the shows they made. So we decided to try and make the film I wanted to see: the showrunners story in their own words”.

What resulted was a four-year odyssey that changed both men’s lives. “Up until then I had worked as a Camera Assistant in the Irish film industry and had carved out a successful career there. To fully embrace making the film I wanted to would mean gambling with that career by relocating to L.A. on a semi-permanent basis for extended time periods and taking a major financial hit as low-budget documentaries don’t come with big Director’s fees. There were also personal sacrifices as I ended up spending so much time in L.A. that my previous life and friends in Ireland became more and more difficult to stay in touch with,” Doyle explains.

McGuffey chimes in: “We knew no one in the TV industry here and no one had ever heard of us. That’s a tough starting point when you’re asking for a chance to pull back the curtain on the world of some of the most powerful people in entertainment.” McGuffey, who previously had a successful career in music working with U2 and later as an actor jokes,

If I had to give myself a title on this project, it would be an ‘Accidental Producer.’ I say ‘accidentally’, because anyone who would knowingly set out on a journey like our must be absolutely out of their tree mental. We didn’t have the resources to hire another Producer in Los Angeles, so I had to learn rather quickly with the help of close friends who had traveled this road before me, especially Vincent Grashaw over at…