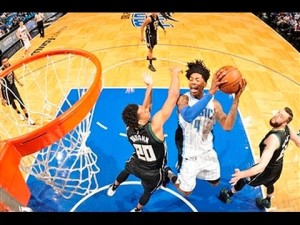 The Orlando Magic came home in the second of a back-to-back and finished strong in their final home game by defeating the Milwaukee Bucks 107-98 in front to a crowd of 18,000 plus at the Amway Center.

The boys in blue lead the whole the game even though they were shorthanded. Victor Oladipo was still suffering from a concussion, Aaron Gordon also suffered a concussion, and Nic Vucevic was sitting with a thigh contusion, but Magic rookie Mario Hezonja, newcomer Ersan Ilyasova and guard Evan Fournier made sure that “Fan Appreciation Night’’ at the Amway Center was another rousing success.

Hezonja set career highs in assists (seven) and steals (five), scored 19 points and came through with clutch shooting whenever the Bucks closed the score a little too close for comfort.

The Magic connected on 48.8 percent of their shots, drilled seven 3-pointers and handed out 28 assists. The Magic were able to dominate with good ball movement and sharp passing, which has lead to a lot of success this season.

The Magic next play against the Charlotte Hornets on Wednesday to close out the season. The game is at 8 pm.