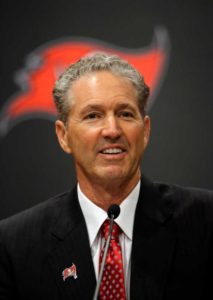 New head coach, new schedule, and the draft coming up. Yes, it’s football season again for the Tampa Bay Buccaneers. The team reported for offseason workouts a week or so ago and was addressed by new head coach Dirk Cotter. Koetter has been promoted this winter following a stellar season as the team’s offensive coordinator.

He has communicated with them durning the offseason, but this was the first time at the complex in the head coaching capacity. “I did talk to the guys,” Koetter said, “mainly just to say that it’s a long road. It’s a long road and everybody’s excited on the first day, of course. I wanted to impart on them that the coaches are happy that they’re back.”

“I didn’t want to bombard them with too much heavy stuff today,” Koetter added. “Mostly just an outline of what the next 10 weeks are going to be like, what the offseason program is going to be like over the next 10 week (and) a few logistical things you’ve got to take care of. I’ll be talking with them a lot more after these first weeks in phase one.” 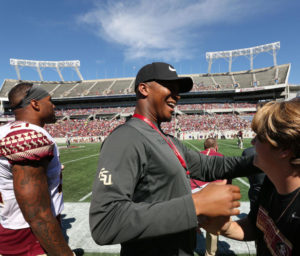 Bucks quarterback James Winston showed up to workouts a svelte 230 lbs and ready to go. “Jameis is very perceptive about not only what he needs to get better but what our offense and our team needs to get better,” coach Dirk Koetter said. “That’s one of the things when you’re around him more, he’s mature way beyond his years with that sort of thing. The reason I got a smile is because that’s a good thing for the Bucs.”

Koetter told Winston he wanted him to have a better chemistry with receiver Mike Evans. So Winston started hanging out with him on and off the field, organizing off-campus throwing sessions to work on the deep ball.

The Buc’s are also gearing up for the NFL Draft and deciding who to take with the #9 pick in the first round. Their major areas of need are at defensive end to cornerback to offensive tackle. Mock drafts at this point have them scattered with players at various of need positions.

Stay tuned for the draft in less than two weeks.