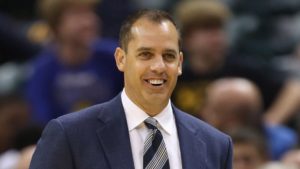 The Orlando Magic have reached a deal with Former Indiana Pacers coach Frank Vogel to be the next head coach of the team. The Magic had to move quickly as several teams,including the New York Knicks, Memphis Grizzlies, and Houston Rockets among others, are also looking.

The Magic were also trying to fill the void left by former Magic coach Scott Skyiles sudden resignation last week. It has been reported that Skyiles did not agree with Magic brass on personnel issues.

Vogel, 42, fits the profile Magic officials set for Skiles’ successor: someone who emphasizes the defensive end of the court and someone who relates well to players.

Vogel began in the NBA since 1997 after following Kentucky coach Rick Pitino from Kentucky to the Boston Celtics. When O’Brien succeeded Pitino as the Celtics’ coach, O’Brien elevated Vogel to an assistant-coaching role. Vogel followed O’Brien and worked as an assistant coach when O’Brien later coached the Philadelphia 76ers and Pacers.

Vogel was promoted to become the Pacers’ interim coach when O’Brien was fired during the 2010-11 season. Vogel guided Indiana to a 20-18 record the rest of the season and was promoted.

He had a 250-181 record with the Pacers, but GM Larry Bird decided to take a different direction and fired Vogel at the end of this season.