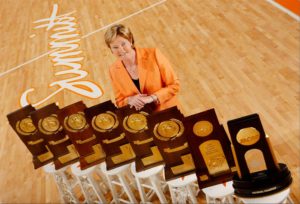 Pat Summitt, the legendary women’s basketball coach has died. She was 64. The legendary Summitt died peacefully, surrounded by those who meant the most to her, in Knoxville, TN.

“She did so with bravely fierce determination just as she did with every opponent she ever faced,” Tyler Summitt said in a statement. “Even though it’s incredibly difficult to come to terms that she is no longer with us, we can all find peace in knowing she no longer carries the heavy burden of this disease.”

Summit was the head coach of the University of Tennessee women’s basketball team for 38 years. She was the winningest coach in NCAA history with 1,098 wins. She won 8 NCAA Championships with the Lady Vol’s. She was a relentless in her pursuit of excellence and had an 100% graduation rate with her students.

Following Summitt’s announcement in August 2011 that she had been diagnosed with early-onset dementia, the coaching icon set up a foundation aimed at advancing a cure for the disease.

“I thought I would be remembered for winning basketball games, but I hope I’m remembered for making a difference in this disease,” she once said, according to The Pat Summitt Foundation.