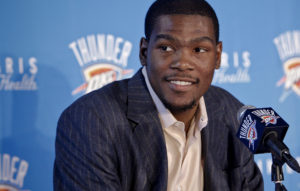 Kevin Durant, the biggest prize in this year’s NBA free agency frenzy, appears to be heavily leaning toweards staying in Oklahoma City next year, first reported by Marc J Spears of ‘The Undefeated’

“His decision is 90 percent made. It would take an amazing sales pitch to change it,” said one of Durant’s longtime friends.

Another Durant colleague said, “It’s going to take some sweet-talking to get him to pass up all the money he can get by staying in OKC.” 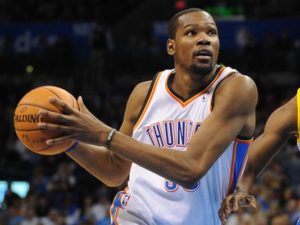 Due to the NBA’s collective bargaining agreement, his current team, the Oklahoma City Thunder, are able to offer Durant more than any team seeking his services. The Thunder can offer him roughly a projected $30.6 million annually as opposed to $28.4 million annually in an immediate multiyear deal elsewhere. If he opts for a shorter deal now and a longer one later, he could make from $40.7 million a year in Oklahoma City and $32.6 million a season elsewhere.

Durant insisted that his decision would be based on basketball and winning, and will try to keep an open mind while listening to pitches from the Golden State Warriors, Los Angele Clippers, San Antonio Spurs, Boston Celtics, and Miami Heat during the July 4th weekend at a house in the Hamptons according to sources. 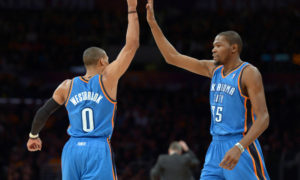 The Thunder do have a championship caliber team surrounding Durant. His partner in crime on the court, Russell Westbrook, battled with him to build a 3-1 lead over the seemingly invincible Golden State Warriors in the 2016 Western Conference Finals, after defeating the perennial champions the San Antonio Spurs, shocking the league.

The Thunder traded forward Serge Ibaka to the Orlando Magic for the dynamic Victor Oladipo and have their sights on Al Hereford on Free Agency to shore up the middle of the team.