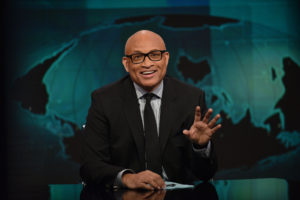 “The Nightly Show” with Larry Wilmore has been cancelled by Comedy Central. The late night show that replaced “The Colbert Report” suffered from dismal ratings.

“I’m really grateful to Comedy Central, Jon Stewart, and our fans to have had this opportunity,” Wilmore said in a statement to the Hollywood Reporter. (Former “Daily Show” boss Stewart recommended him for the job.) “But I’m also saddened and surprised we won’t be covering this crazy election or ‘The Unblackening,’ as we’ve coined it.”

With a dismal 0.2 rating, the cancellation of the shows no surprise.

“Unfortunately, it hasn’t connected with our audience in ways that we need it to, both in the linear channel and in terms of multi-platform outlets,” Comedy Central president Kent Alterman told the Hollywood Reporter.

The show will air through this Thursday and then be replaced by “@midnight” noted by Chris Hardwick.

Wilmore, 54, began his run on Comedy Central in 2006 as the “Senior Black Correspondent” on Stewart’s “The Daily Show.”