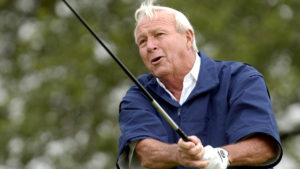 Golfing legend and “Golf King” Arnold Palmer has died. He was 87. The cause of death appears to be complications from heart issues. Palmer was admitted to a hospital in Pittsburgh, Pa. onThursday for some cardiovascular work and weakened over the last few days.

Palmer was the accessible common man who would become the King and lead his own army. Along the way he became one of the sport’s best players and a successful businessman, philanthropist, trailblazing advertising spokesman, talented golf course designer and experienced aviator.

“We are deeply saddened by the death of Arnold Palmer, golf’s greatest ambassador, at age 87,” the U.S. Golf Association said in a statement.  “Arnold Palmer will always be a champion, in every sense of the word. He inspired generations to love golf by sharing his competitive spirit, displaying sportsmanship, caring for golfers and golf fans, and serving as a lifelong ambassador for the sport.  Our stories of him not only fill the pages of golf’s history books and the walls of the museum, but also our own personal golf memories.  The game is indeed better because of him, and in so many ways, will never be the same.” 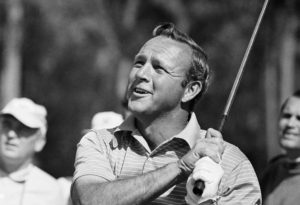 From 1958 through 1964, Palmer was the charismatic face of professional golf and one of its dominant players. In those seven seasons, he won seven major titles: four Masters, one United States Open and two British Opens. With 62 victories on the PGA Tour, he ranks fifth, behind Sam Snead, Tiger Woods, Jack Nicklaus and Ben Hogan. He won 93 tournaments worldwide, including the 1954 United States Amateur.