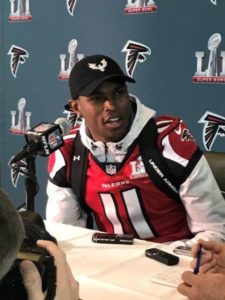 Houston- Julio Jones made a few things plain and clear in a press interview at yesterday’s Super Bowl media day.

When he was asked Wednesday if he believes there is anyone in the NFL who can cover him, Jones did not mess around.

“One on one, no, I do not,’’ Jones said, without a hint of braggadocio.

Since Jones and the Atlanta Falcons will be facing mastermind Bill Belichick and the New England Patriots, Jones wanted to make it clear that he is not afraid of them.

It is doubtful the Patriots will dare to test this theory, but, with Bill Belichick, you never know. As expectation grows that the Patriots in Super Bowl LI will surround Jones with a big cornerback — Logan Ryan comes to mind — and a safety — Devin McCourty qualifies — and dare the other Falcons to ignite their prolific offense, Belichick may pull a fast one and tempt Matt Ryan to look so often to Jones that the attack becomes unbalanced.

Jones also noted that he isn’t afraid of Coach Belichick’s famous tactical genius when it comes to making adjustments and coverage assignments. 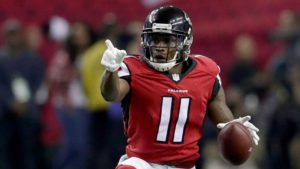 “Is it easy to take me out?’’ Jones asked. “If you scheme properly that’s cool, but I don’t mind it at all because we have a lot of weapons around. I don’t mind you trying to take me away. It’s not a one-man show, it’s a team effort.’’

Unlike most star receivers, Jones shows patience, even if Ryan’s passes go to one of the many Falcons who can do damage to an opposing defense.

Jones, in a departure from other renowned pass-catchers (Odell Beckham Jr. and Antonio Brown, to name two of them), is controversy-free.