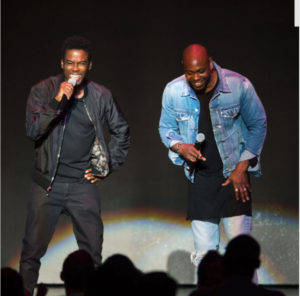 The show at the Saenger Theatre in New Orleans on Saturday night was already supposed to be good. It was the first of Chris Rock’s three nights at the venue as part of The Total Blackout Tour, his first full-scale world tour in almost a decade.

It turned out to be even better than that when comedian Dave Chappelle ― who released two stand-up specials on Netflix simultaneously just last Tuesday ― surprised the crowd by walking onstage after intermission. He reportedly prompted a standing ovation.

“Tonight, you are all part of a social experiment,” said Chappelle, according to NOLA.com. “Stranger things have happened in New Orleans.”