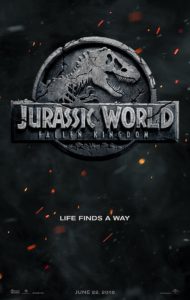 Jurassic World was released in 2015 and have grossed a whopping $1.6 billion dollars world wide.  With that kind of success, it’s no surprised the studio decided to do a sequel.  The sequel is set to be released on June 22, 2018 staring Chris Pratt and Bryce Dallas Howard.

The studios have not released a synopsis yet.  They have released the poster, title and the main cast.