Orlando soccer fans had a couple of tough matches to follow.

On Friday, Orlando City dropped a match to Atlanta Union FC 1-0. With a raucous, capacity crowd on hand, the Lions took the energy of the fans and started with intensity. Players were driving and chasing balls full speed, making maximum effort to press the ball forward for scoring opportunities.

Cyle Larin did not start the match due to him flying in late the night before from a match with Team Canada in Phoenix. Larin literally came straight from the airport to the stadium to join hi team.

The absence of Larin was very noticeable. Orlando was able to drive the ball right up to the box, with Kaka ready to deliver an assist for goal several times, but no one was there.  With Larin, several more shots would have been made from inside the box.

“For me it’s not so much about personnel at the moment. I think we’re doing a really good job of getting in and around the opponent’s penalty box and then I think we’re getting the ball into some really dangerous spots. We’re talking a lot about trying to get the right number of players involved in our attacking movements and all the way into the penalty box. That’s one thing that I think at the moment we have a lot of guys that are happy to hang around the top of the penalty box but not get themselves into the penalty box. We’re going to need more options in there in order to score goals. It’s been a focus of ours. It’s something we talked about at the beginning of the two-week break and I thought tonight there was still too many plays where we’ve just got guys that are a little bit hesitant to get themselves all the way into the box and mix some things up a little bit more.”

Orlando had many opportunities and had 14 shots and many near misses, but nothing went in.

In the 88th minute, Atlanta’s Hector Villaiba shot a rocket from the left side that sailed over Orlando goalie Joe Bendik’s head for a goal and the match’s only score.

On Saturday the Orlando Pride dropped a match in Schiga against the Stars 2-1. Orlando’s one score came from Alanna Kennedy who scored her third goal of the season in the 93+ minute. 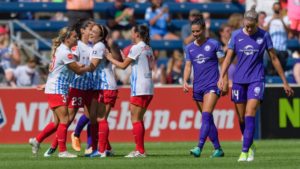 The home side opened the scoring in the 29th minute, with Sofia Huerta sending a ball over the top of the Pride backline, finding target forward Christen Press behind the defense. Though Aubrey Bledsoe attempted to come off of her line and steal the ball, Press took a move around the Pride goalkeeper to make it 1-0 just two minutes before the first half hydration break.

Press doubled the Red Stars’ lead seven minutes into the second half in similar fashion, beating Bledsoe on a break for her second goal of the match.

With the Pride pressing forward late in the match, Kennedy found herself on the benefiting end of a Rachel Hill cross, slamming in her third goal of the season in the 93+ minute. After finishing all three prior meetings with Chicago with 1-0 losses, Kennedy’s goal marked the first goal the Pride have scored against the Red Stars in Club history.

Alex Morgan, making her third start of the season in the match, had the Pride’s best opportunity on net in the 37th minute but stout goalkeeping preserved the, then, 1-0 Chicago lead. Camila sent a lofted ball into the top of the six-yard box but Alyssa Naeher came up with a huge save, denying Morgan on the point-blank header.

Orlando next turns its attention to a 7:30 p.m. ET rematch with the Red Stars in two weeks