Comedian and civil rights activist Dick Gregory passed away today. He was 84.

“It is with enormous sadness that the Gregory family confirms that their father, comedic legend and civil rights activist Mr. Dick Gregory departed this earth tonight in Washington, DC,” the post reads. “The family appreciates the outpouring of support and love and respectfully asks for their privacy as they grieve during this very difficult time.”

His publicist of 50 years Steve Jaffe says that Gregory was surrounded by members of his family, including his wife of 58 years, Lillian, when he died in Washington’s Sibley Memorial Hospital. Gregory was admitted a week ago for symptoms of heart failure, interrupting an East Coast comedy tour. 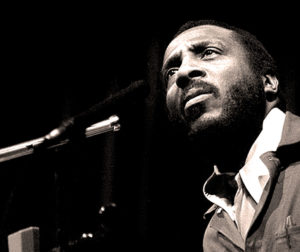 Gregory was a breakthrough performer in his appeal to whites — a crossover star, in contrast to veteran black comedians like Redd Foxx, Moms Mabley and Slappy White, whose earthy, pungent humor was mainly confined to black clubs on the so-called chitlin circuit.

Gregory transformed cool humor into a barbed force for civil rights in the 1960s. He then veered from his craft for a life devoted to protest and fasting in the name of assorted social causes, health regimens and conspiracy theories.

He won audiences over with wry observations about the country’s racial inequalities.